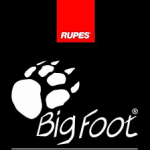 Built to handle any detailing situation, the new LHR 15 MarkIII is the new frontier of detailing. The ergonomic design allows for precise paint correction with complete comfort, in curved surfaces and difficult to reach areas. The LHR 15 MarkIII operates at a higher rpm compared to the LHR21 MarkIII. This increased speed provides equivalent correction and does so with a pad diameter and orbit that are more conducive to curved or varied surfaces.

RANDOM ORBITAL: the backing plate follows an orbit (the amplitude of which depends on the distance between the rotation axis of the drive shaft and the central axis of the backing plate) and is free to rotate about its own central axis. The backing plate is free to rotate at varying velocities and directions by effect of the centrifugal force of the offset movement and by effect of friction. Should the friction forces be such as to prevent rotation of the disc while the tool is still operating, the random orbital movement would simply become an orbital movement. The number of disc rotations is variable and independent of the number of orbits performed. The random orbital movement is at present the best compromise in terms of effectiveness and surface treatment quality.

IMPROVED ERGONOMICS
The rubberized front grip of the MarkIII offers exceptional comfort for the operator while providing a non-slip surface for control. The improved rear handle also integrates rubberized surfaces for improved feel. Two strategically placed, non-marking, tool rests provide stability when the tool is not in use as well as additional protection against unintended impact. The continued refinement of the BigFoot random orbital platform in MarkIII reinforce its best in class reputation, making the best even better.

ELECTRONIC SPEED CONTROL DIAL
The new electronic speed control dial allows for easy adjustment of the top speed of the polisher without requiring the operator to move his hands. The larger dial is easily adjusted with a move of the thumb. High visibility numbers and a more positive feedback from the movement of the dial make speed changes feel more deliberate, allowing operators to select the ideal speed for the task without any interuption to the polishing process.

9 METERS ELECTRICAL CORD
The new Heavy Duty extra long 9mt cord is gauged to deliver maximum power to the polisher for safe, efficient operation. The longer cord save you time, steps and hassles since the user doesn’t have to use additional extension cords when polishing around a car.

PROGRESSIVE TRIGGER
Adding an additional layer of control is the new progressive trigger. Acting as a throttle to control speeds within the dial range, the progressive trigger allows the operator to make subtle adjustments for precise control without interruption of the process or need to reposition the grip to access the speed dial.

DESIGN
Attention to detail is something more than just attractive design. Every detail, such as the rubber support positioned on the body of the machine to keep it stable during the non-working stages, is the result of meticulous research aimed at achieving maximum operator comfort.

There are no reviews yet.

Add to Wishlist
Out of stock

You can find out more about which cookies we are using or switch them off in settings.

This website uses cookies so that we can provide you with the best user experience possible. Cookie information is stored in your browser and performs functions such as recognising you when you return to our website and helping our team to understand which sections of the website you find most interesting and useful.

Strictly Necessary Cookie should be enabled at all times so that we can save your preferences for cookie settings.

If you disable this cookie, we will not be able to save your preferences. This means that every time you visit this website you will need to enable or disable cookies again.

This website uses Google Analytics to collect anonymous information such as the number of visitors to the site, and the most popular pages.

Please enable Strictly Necessary Cookies first so that we can save your preferences!